What the “Foot” is Reflexology? 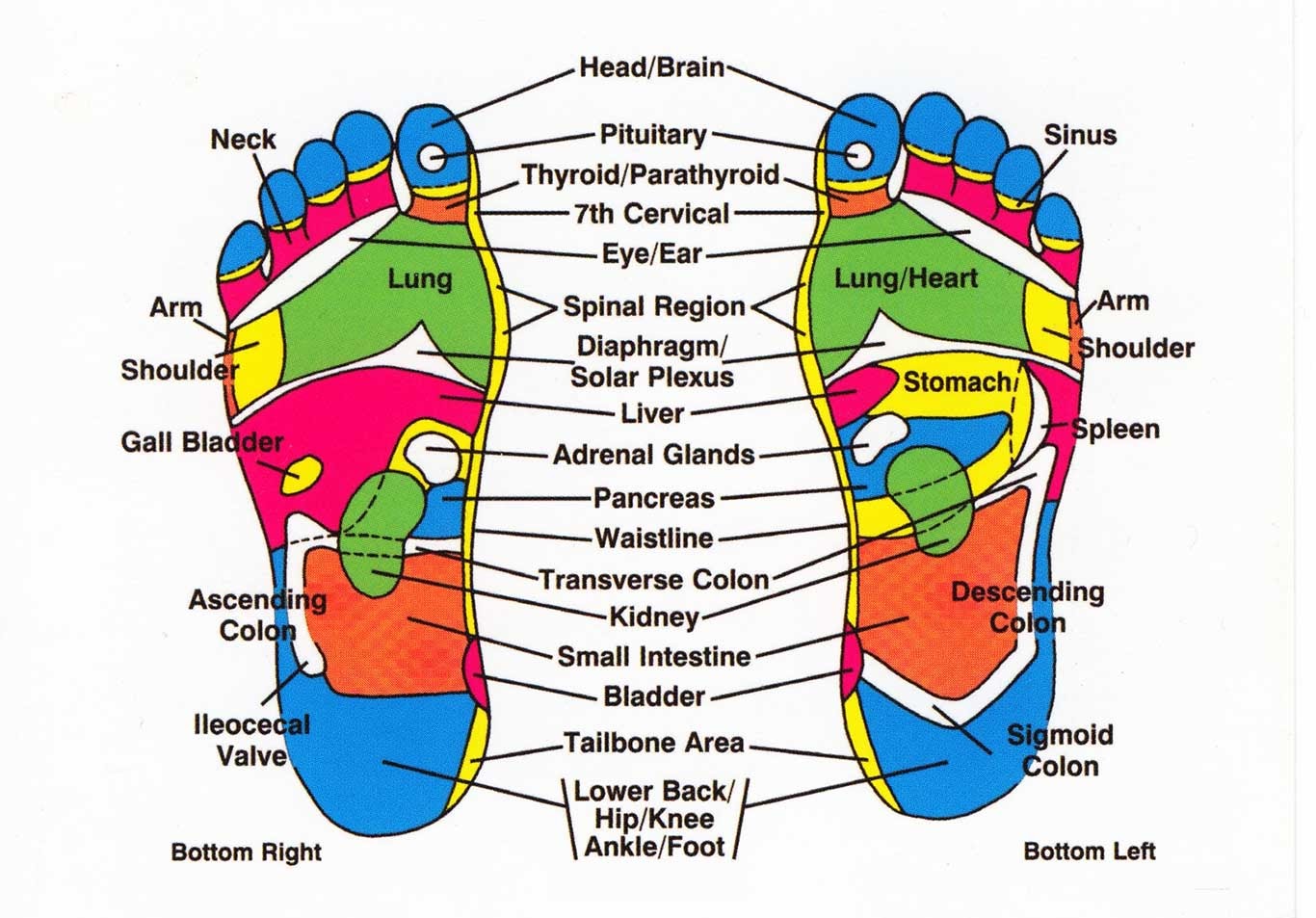 Reflexology is a type of alternative medical practice where pressure is applied to the hands or feet to promote healing in other organs such as the liver, stomach, and brain. Reflexology has been practiced for centuries in different cultures most notably in Traditional Chinese Medicine. It was used by healers in ancient China for a wide array of conditions such as depression, stress, joint pain plus more.

Reflexology is visually similar to a foot massage but they are very different. Both are forms of foot therapy but a foot massage focuses on bringing relief to the feet from conditions like plantar fasciitis while reflexology goes far beyond the feet.

How does reflexology work?

Reflexology works by stimulating your reflex points to promote healing in their corresponding organ. Reflex points are areas on your feet or hands that represent an organ in the body. By applying pressure to a certain reflex point, a reflexologist can tell if there is potentially an ailment in its corresponding organ.  If it is confirmed that there may be an abnormality in the organ, certain types of pressure is applied to the point to promote normal function to the organ. 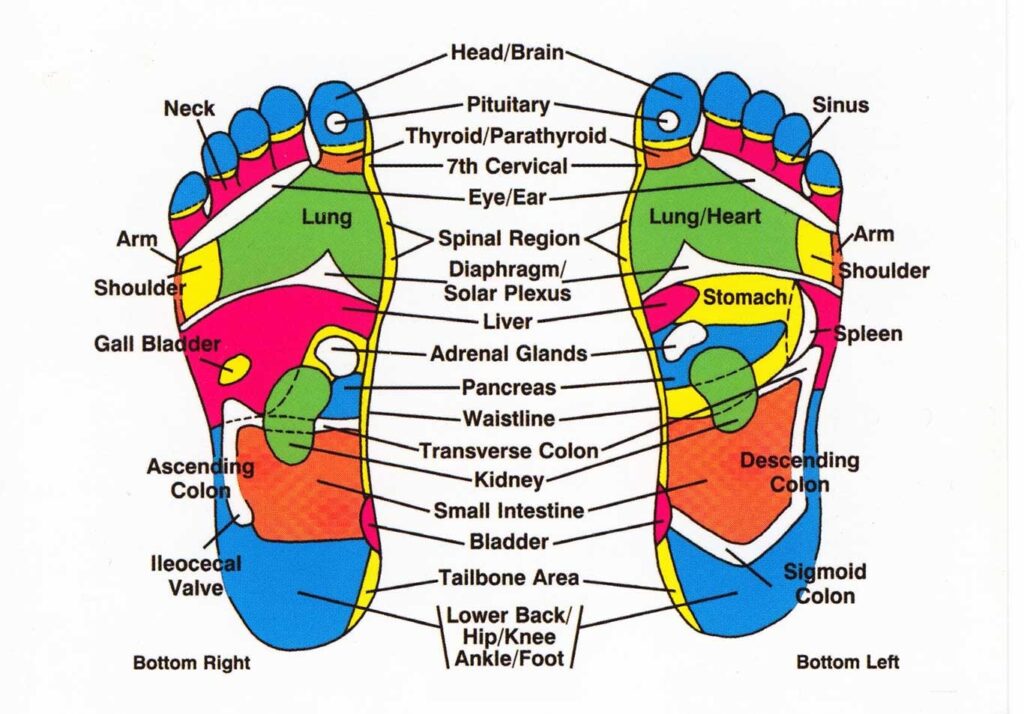 Reflex points on the feet and their corresponding organs.

Reflexology also uses acupoints or acupuncture points in the feet and hands to improve health in other parts of the body.

There are other theories that attempt to explain how reflexology works. In Traditional Chinese Medicine, it is believed that reflexology works by unblocking Chi (energy) allowing it to flow freely in the body.

What are the health benefits of reflexology?

While studies have managed to prove the above conditions, people have seen other benefits from undergoing reflexology. These benefits include improved digestion, reduced premenstrual stress symptoms, increased energy, migraine relief, improved respiratory function, and faster healing or relief from conditions like arthritis and back problems.

What conditions can benefit from reflexology?

What happens during a reflexology appointment?

If it is your first session, the reflexology appointment will usually start with an assessment. Here, the practitioner asks you about your health and medical history. The practitioner may ask you if you have any chronic conditions, infections, or illnesses in general. He/she should then be able to tell you if it is safe for you to undergo reflexology or not.

Other things your practitioner may need to know include;

The practitioner should also give you more information on how the session will be conducted. Feel free to ask as many questions as you need to. This will help reassure you during the reflexology session. It is very important for you to feel relaxed when reflexology is being delivered.

The practitioner will decide what points are best to apply pressure to; hands, feet, ears, or all.

Your position during the session will be determined by what points are going to be worked on. However, you will likely lie down to help you feel more relaxed. Since reflexology is done on the hands, feet, and ears, you will not have to take off your clothing as you would for a full body massage. 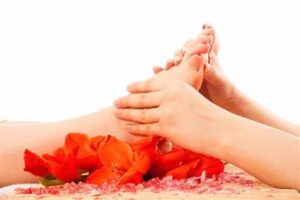 Depending on the condition you are addressing, the reflexologist will start to apply compression to certain areas on the feet, hands, or ears. If for example, you have digestive issues, he/she will focus on the central part of the foot (see image 1). However, they may still work on other parts of the foot.

A reflexology session will take anywhere from 30 minutes to 1 and a half hours. If you need to sleep during the session, go for it.  You will still receive all the health benefits of reflexology in full.

Every reflexologist has a unique way of ending their sessions. Most will try to calm you down and bring you back to full awareness. It is recommended to move as calmly and slowly as possible after the session. A glass of water is also highly recommended to help you feel refreshed. Since reflexology is described to help to flush out waste and toxins, drinking water will also help make this process more efficient.

How should you feel after a reflexology session?

Since all bodies are different, the reactions to a reflexology treatment differ from person to person. However, generally, one should feel much better after their session. If you feel any negative effects of the treatment, speak to your practitioner immediately. If the signs or symptoms persist, pause the treatment until you understand what the root cause might be.

Otherwise, some of the positive reactions you should experience after a reflexology session include;

Reflexology is generally safe to try. It is especially safe if performed by a qualified practitioner such as a chiropractor or certified reflexologist. However, there are certain conditions under which reflexology is contraindicated. These include;

There are also conditions under which reflexology must be performed with extreme precaution. Under these conditions, the treatment must also strictly be performed by a qualified professional. Such conditions include;

Where should I get my reflexology treatment done?

There are organizations that have qualified practitioners (such as Rub Massage).  Other professionals that perform reflexology include chiropractors, massage therapists, and physical therapists.

Remember, just like any treatment, the effects of reflexology are cumulative. It’s recommended to receive multiple sessions to fully experience the benefits of the treatment.  If you do not feel any change after your first session, do not give up just yet. Continue with it for at least three sessions.

In conclusion, even though reflexology is not prescribed for the treatment of any disease, it can be used in combination with other treatments for certain conditions. It provides tremendous benefits to both sick and healthy individuals.

If you have any condition or disease, chronic or otherwise, consult your doctor before receiving any form of reflexology treatment.

Menu
This website uses cookies to improve your experience. If you continue to use this site, you agree with it.
Ok